One mid august Sunday I get a call from Saahil asking if I want to get Leh - but I have to decide in half an hour. What the hell - yes - I’ve wanted to go there for the last 3 years. Very reasonable rates Rs 7500, more or less everything provided by the YHAI.

Except. Fun stuff like getting a GRE date. Anyway somehow pull that off - get the best possible date, two days before the trip.

Finish GRE. Half dead the next day, but have to work. Then realize flight was one day before I thought it was - start packing 3 hours before the flight (thanks Mum, Dad, Deej). Fly Mumbai - Raipur - Bhopal - Delhi - Leh. I’ve been on trains with less stops.

Reach Leh, take a cab to the YHAI place - Jimmy House. After registering, we’re told to sit around and sleep the whole day at the house with the black gate - nothing strenuous like climbing onto the terrace and taking pictures or anything ;). 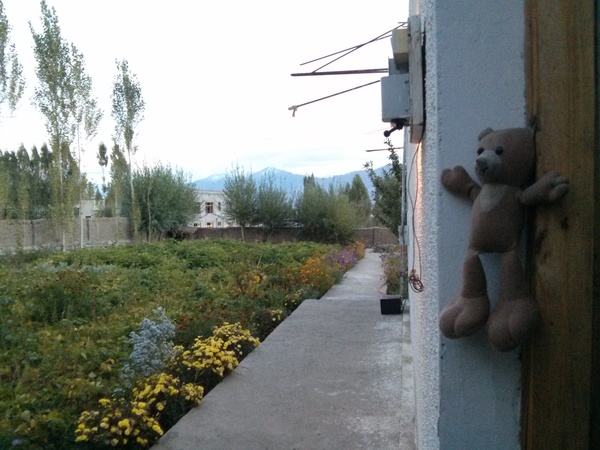 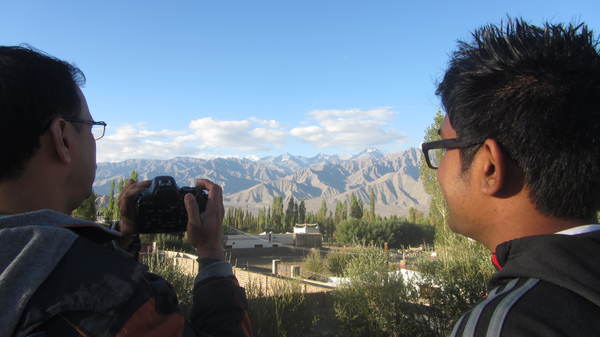 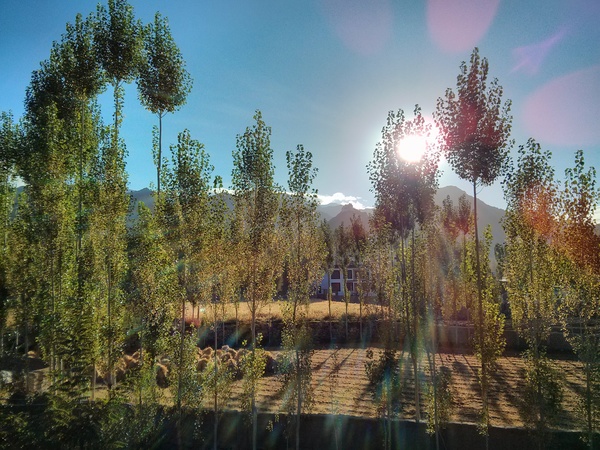 The next day, we walk around Leh, eat ladhaki Khari biscuits, buy dubba’s for packed lunch and check out the Leh market, all that. Introduced to the people from outside our group of 6 in the room. Met the bicycles - trek 3700s. Very climbing oriented gearing. Soup. Dinner. Bournevita. Sleep.

Next day we did a cycle around to an Army museum called the Hall of Fame museum – they had decent chai. Went to Spituk monastery - brilliant (read: typical ladakhi) views. Drink chai, lunch and the come back the same way - only this time uphill. Saahil and I were selected as the rear guard with the green flag, keep the cycle kit with us. Soup. Dinner. Bournevita. Campfire (without the fire). Sleep. 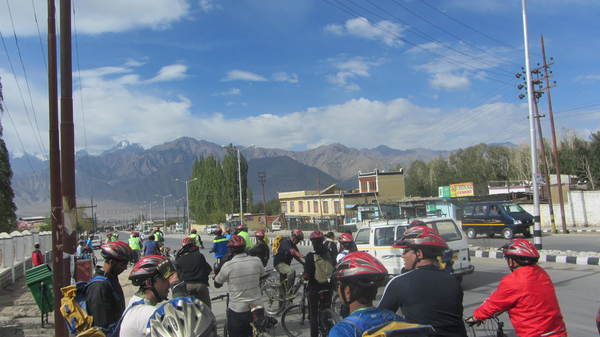 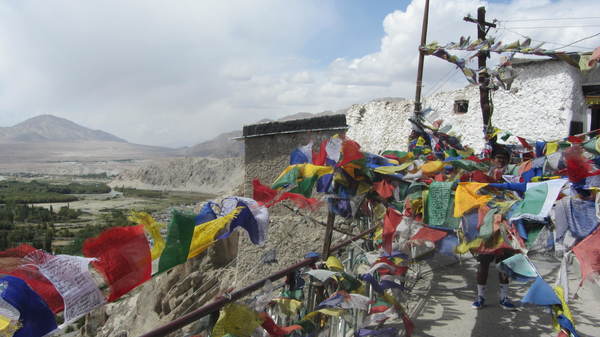 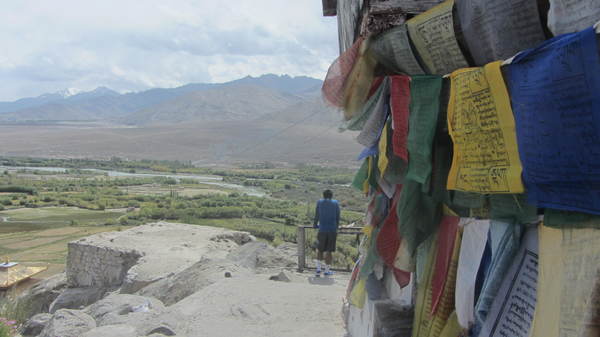 It’s uphill, but only slightly… what kills us is the wind - it’s blowing against us. The sun’s high up in the sky, making you sweat and the wind immediately blows it away. Not a bit of shade in sight. Freezing and sweating at the same time. Once we’re about halfway up, our waters over two. By this point about half of us are walking our bikes up. Saahil and I though, we’re cycling up about 300 meters, walking back, and taking someone else’s cycle up. Finally reach the Sikh gurudvara we’re supposed to have lunch at by 3. It was all downhill from there, but in a good way. 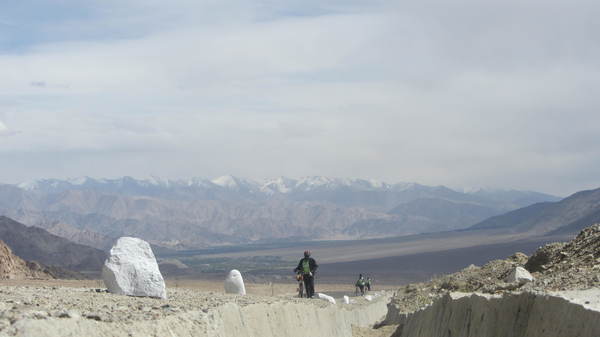 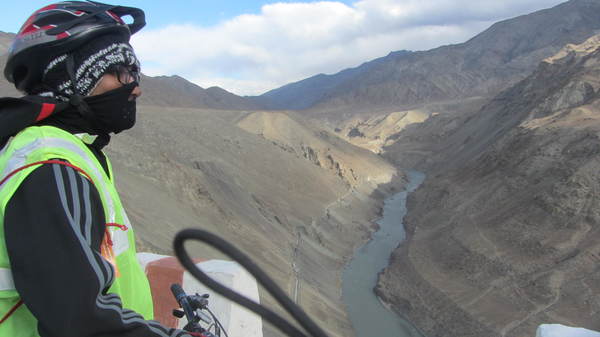 Freezing water, if you last 2-3 minutes in the water, the pain give way to numbness and it becomes quite nice. 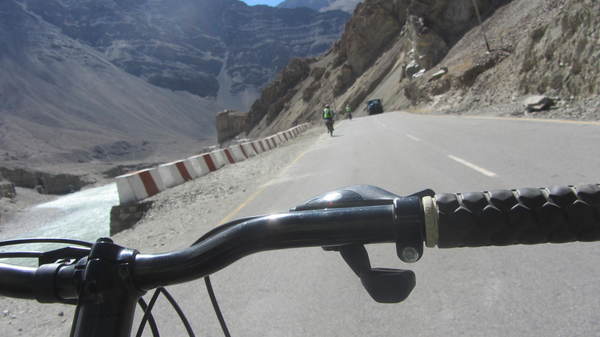 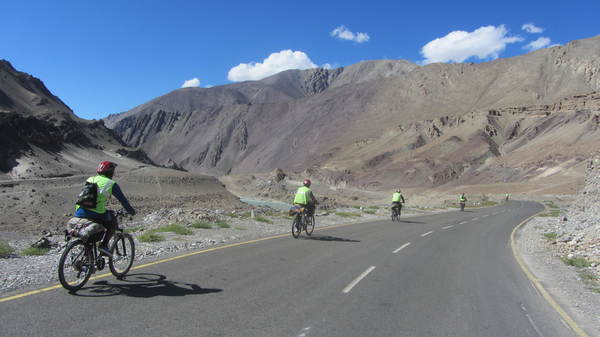 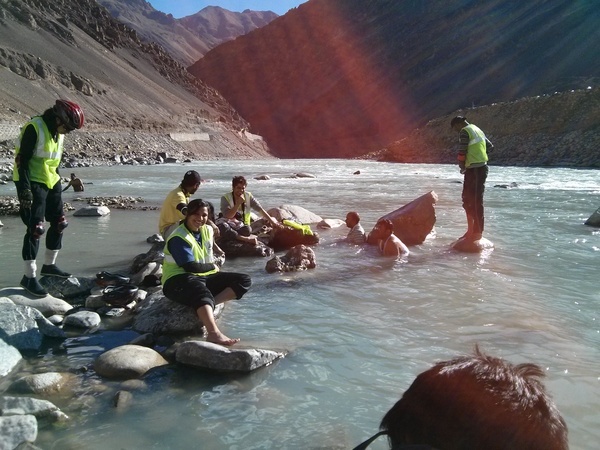 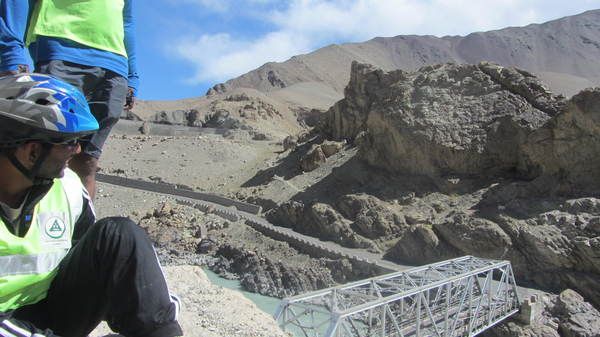 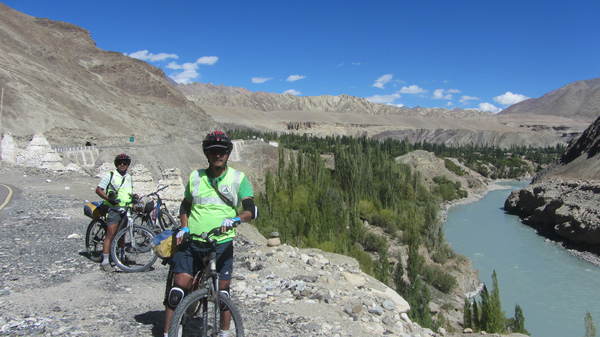 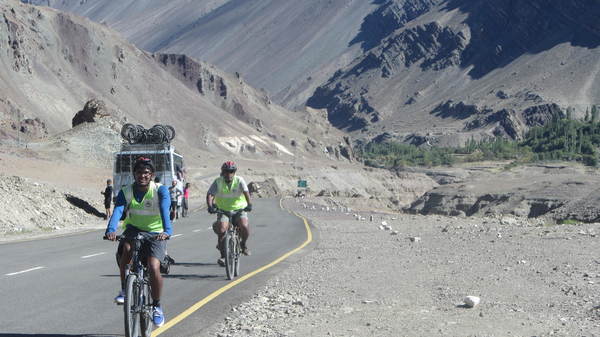 More of a resort than a camp and bloody pretty. 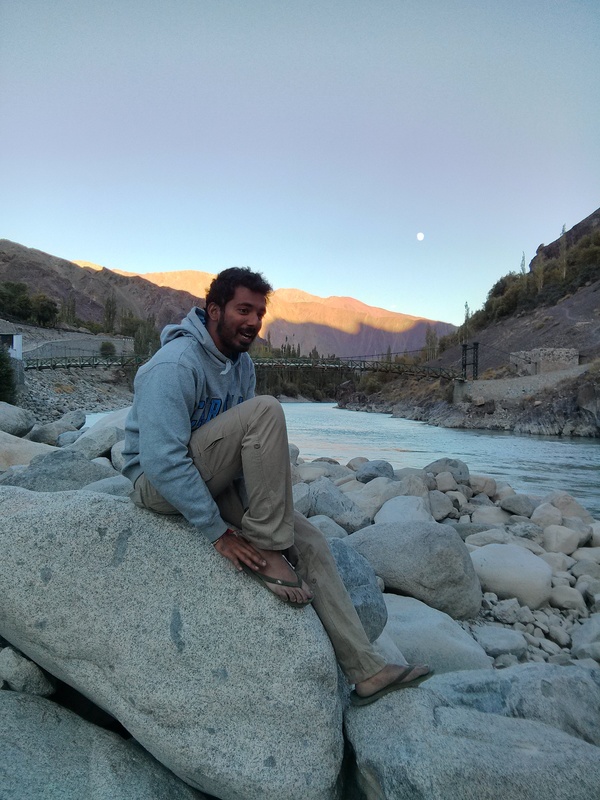 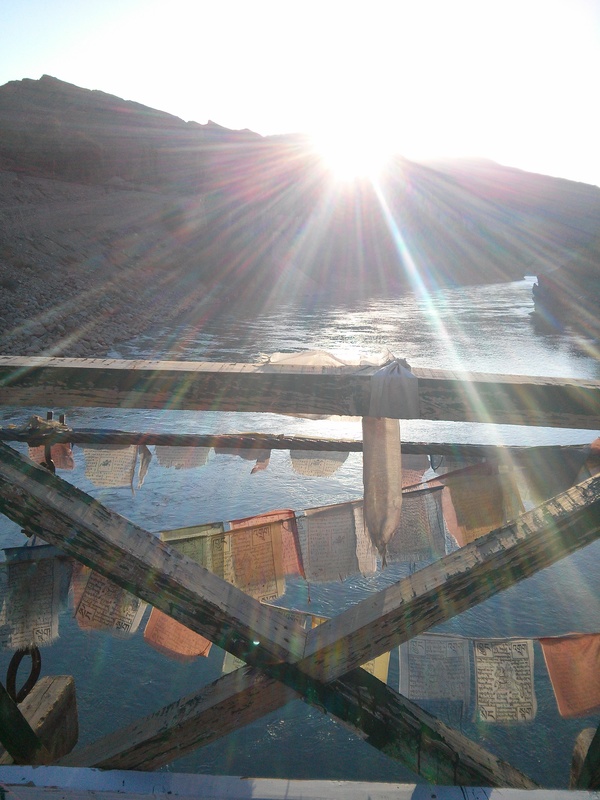 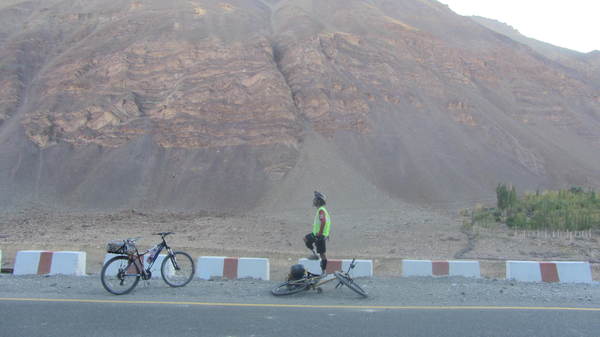 // Sorry no pictures - batteries were dead

Played a game of intensive ludo - prerequisites: A ludo board, dice, counters, four Delhi Boys. Counting squares is accidentally or intentionally approximate, every turn is 3-teams-vs-the-winning-team, rules may be made up mid game unless someone objects, extra points for driving customers away from resorts because of the noise.

The day of eating and taking cycling breaks

The last day, coming from Lamayuru back to Leh, some of us set off for Fotula Top, the highest point of the Leh-Srinagar Highway. We left pretty late, and expected to miss breakfast before we leave for Kaltse. We took roughly an hour and a half to climb up to the pass, 10 minutes up there, and half an hour back down. 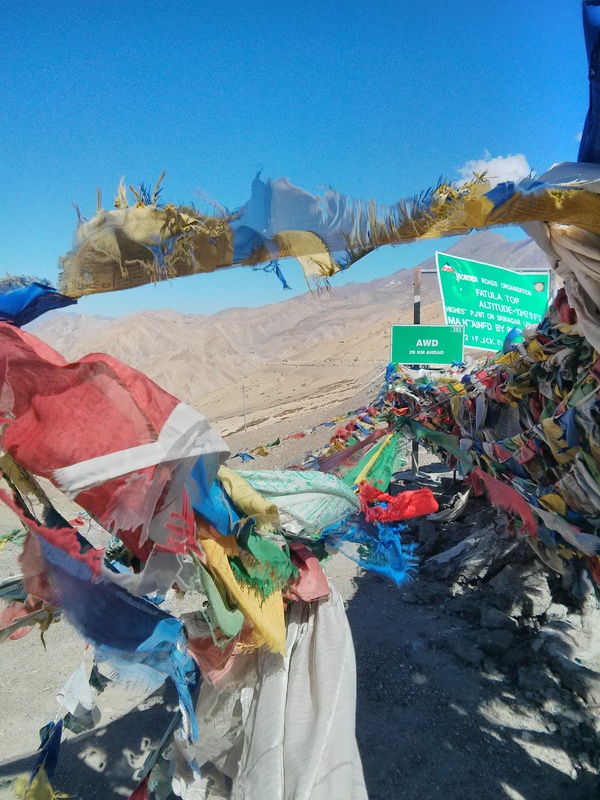 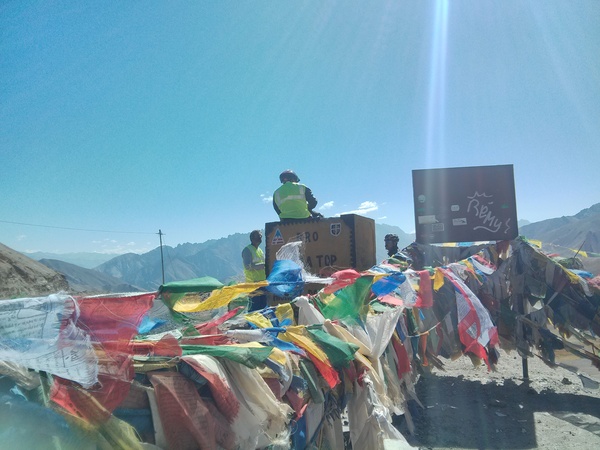 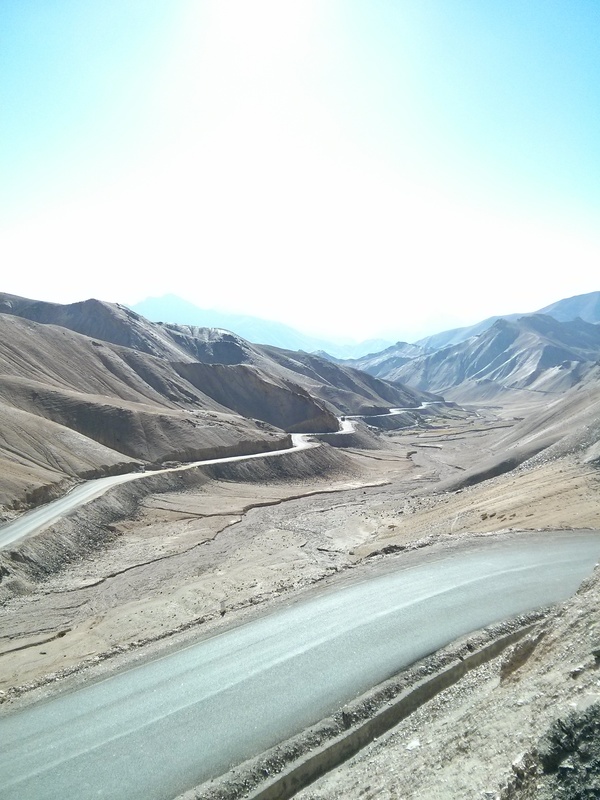 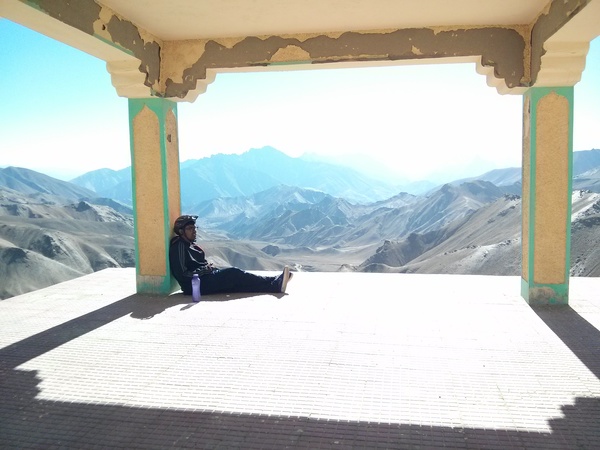 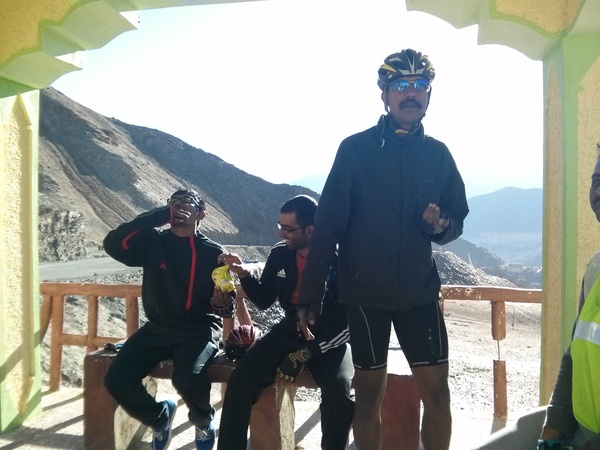 When we got back, the guys running the place we were staying we nice enough to re-open the breakfast buffet. Everyone stuffed themselves.

Since clearly our plan of eating samosas at Tiger Hill Cafe was clearly not going to happen, we decided to take it much easier than our normal catchup-with-group-wait-half-an-hour-and-continue pace, we did a eat-for-half-an-hour-have-chai-and-wai-wai pace instead.

Somewhere along, the Delhi boys organized a Punjabi dance on the highway; Sumit joins us with his ‘tap-dancing shoes’.

Found a Punjabi dhabba that made good omelets, ate, drank tea. Found a place in Khaltse where they served good Tibetan food - Thupka and chow mein. Found a shade spot on the highway… brought out the wai wai. Got on the bus, stopped at the gurudwara and ate at the langar. Then we had some tea (Best masala chai ever.) and biscuits too.

Headed off on a road trip to Pangong Lake, 6 hour ride each way, pretty views. As in no the normal Ladhakh view pretty - that’s gotten boring by this point. Discovered Kawa - kashmiri tea - and was of course immediately addicted to it. 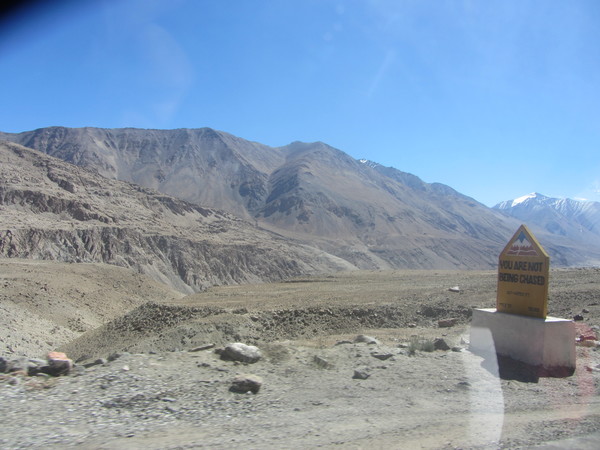 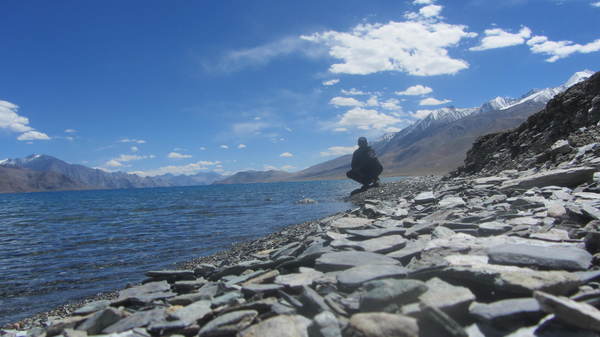 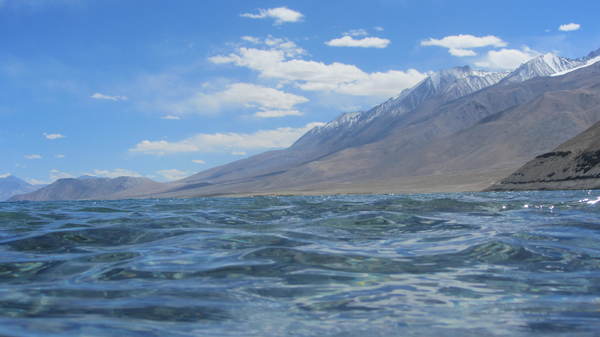 Got back and gathered most of the group for an ‘authentic Tibetan meal’.

Left the next day via Srinagar 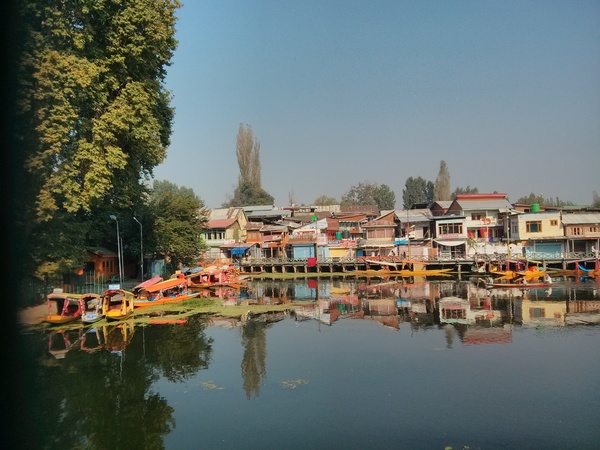 Leh base camp to Spituk monastery

Spituk back to leh